Vue is a front-end JavaScript framework for building UIs (User Interfaces) and SPAs (Single-Page-Applications). Vue 3 has been out for a while, but until now, I hadn’t taken the time to jump into it since it’s a little daunting to have to learn something new.

But no more excuses. I’m diving into Vue 3, and I’m going to write my impressions of how it compares to Vue 2. If, like me, you have questions such as:

Then this series of posts will be valuable to you! Read on if you are interested in getting started in Vue 3.

CLI - What we get out of the box

Vue CLI helps you bootstrap a new Vue project, giving you all the files you need to get up and running.

With Vue 2, all you had to do was run the following command in your terminal (as long as you had Vue installed first), and the CLI would guide you through setup.

Good news! With Vue 3, it’s almost entirely the same. After you have installed Vue 3, you can just type that command, and you will see a list to choose from. You can select either Vue 2 or Vue 3 for your new project.

I love this because it means I don’t have to fully commit to going over to Vue 3 if it turns out it’s not to my liking. I can easily bootstrap a project in either Vue 2 or Vue 3 after upgrading to Vue 3.

I’ll select Vue 3 this time, so I can see how this scaffolded project compares to what I would get out of the box with Vue 2. I’ll start by looking at the files I expect I would need.

As a Vue user, I know that three of the important files that make Vue work and render onto the page are:

I’ll examine those files first to see if there are any noticeable changes between Vue 2 and Vue 3. Notice in the screenshot that the file structure of a project created by the CLI is identical for both Vue 2 and Vue 3. However, if we dig in and examine the three files I called out in the list above, we’ll find some changes. 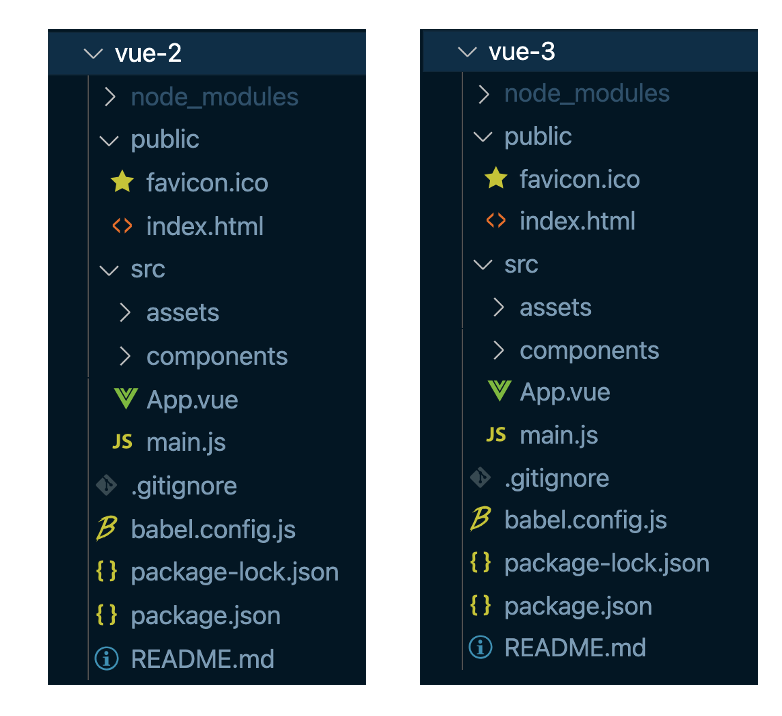 When building even the most basic webpage (not just Vue projects), the index.html file is the file that serves as the default starting page, giving the basic skeleton of what we see on the page (the basic HTML structure).

Here is the index.html file that is created with a Vue 2 project. And interestingly, the file is exactly the same in a Vue 3 project.

This file is extremely important, which is why it is my first instinct to check it out and see if anything has changed between Vue 2 and Vue 3.

The index.html file contains a div element with id="app", and that is where Vue knows to look so it can mount the application into the DOM.

Vue uses this div as an entry point for where to inject all the Vue files. Within those Vue files, the Vue magic happens, but it is that first entry point div that gets the Vue code into the main HTML page.

Since this file is identical in both Vue 2 and Vue 3 projects, this tells me that at least in this aspect, both Vue 2 and Vue 3 use the same approach to putting Vue files in the DOM - they search for a div in the index.html file, and when the div is found, the Vue app attaches to that particular element.

The main.js file in a Vue project is where the Vue instance itself gets initialized. (A Vue application is a Javascript object under the hood - each unique Vue project is an instance object of the Vue object. It inherits properties and methods that make Vue work the way it does.)

This is clearly a big change. I want to understand both, so I’ll first explain what’s happening in Vue 2 and then compare it with Vue 3.

First, I’ll take a look at what’s going on in Vue 2. I notice these two important statements:

The Vue constructor function has to be imported from Vue so that it can be used to create a new instance of Vue. App is also imported (it is the App.vue file in the project) because I need a root Vue component where all my Vue code will live. Any children components I later build will come into the project through that App file.

This is the Vue constructor function being used. new Vue() creates a new instance of the Vue object. And an object is passed into the constructor function Vue({...}) which is known as the options object. This is why Vue 2 is sometimes referred to as the Options API (even though the Options API is just a part of Vue 2). The options are those properties like data, methods, mounted, computed, and so on.

On the next line, I see render: h => h(App). The render property tells Vue to render the component as HTML (render is actually a function that is part of the Vue options API). You can read more in this article about why the h is used if you are curious. The code in the App.vue component file is passed into that render function, so it gets built out as HTML (and there is other stuff going on to make Vue do its reactivity magic).

The $mount method is a built-in Vue method that manually starts the mounting of the Vue instance.

In Vue 3, I see that the main.js file looks very different:

This seems like a lot less code. Instead of importing a constructor function to create a Vue object instance, I see a function called createApp being imported. It’s striking to me that initialization is happening with just one line of code, createApp(App).mount('#app').

Even though it’s not apparent here, the createApp function is actually still using the new Vue() constructor inside the function. The difference now is that it makes a copy of the Vue instance. Instead of using new Vue() directly (and directly adding configuration options which will affect all uses of that Vue instance, resulting in mutations to global state), the createApp makes a copy that can be separately configured. By encapsulating this within a function, it gives me the ability to create separate Vue instances, and configuration to each instance won’t affect other instances.

This is an improvement because now it’s easier to create two Vue objects with separate configurations if needed. Here is an example of a setup that is doing that:

Why is this helpful? I can only imagine possible situations. Perhaps if different teams using Vue want to build off the same main App file but add their own options, plugins, features, etc. Or maybe so that I could build something as a core but then branch off on different paths to see how different configurations work.

Whatever the reason, just having that ability has made Vue better.

The last file I want to look at to see if there are any differences out of the box is the App.vue file.

The App.vue file is the root component, the one that is the starting point for rendering the Vue code when the application gets mounted to that DOM element in the index.html file.

Here is the Vue 2 App.vue template:

And here is the Vue 3 App.vue template:

I’m surprised to see that there is no longer the need for the surrounding root div in the template. We are no longer required to have a single root element, like so:

In Vue 2, we had to provide a single root element as the direct child of the template, but now in Vue 3, we can have many direct child elements, i.e., multiple root elements. This eliminates all the extra divs that showed up around the HTML code for each component.

However, it means that if you put a non-prop attribute on the component, and you use multi-root elements rather than a single root element like in Vue 2, that attribute won’t show up in your component unless you explicitly bind an element to those attributes. Just something to be aware of.

So far, I’m not too intimidated by these changes I see in Vue 3 versus Vue 2, but I haven’t really gotten into the big stuff yet.

In my next post in this series, I’ll examine the setup() function, which is probably the most important change to understand. It will be a good opportunity for comparing the Composition API (which comes with Vue 3) versus the Options API (which was the Vue 2 way of doing things). 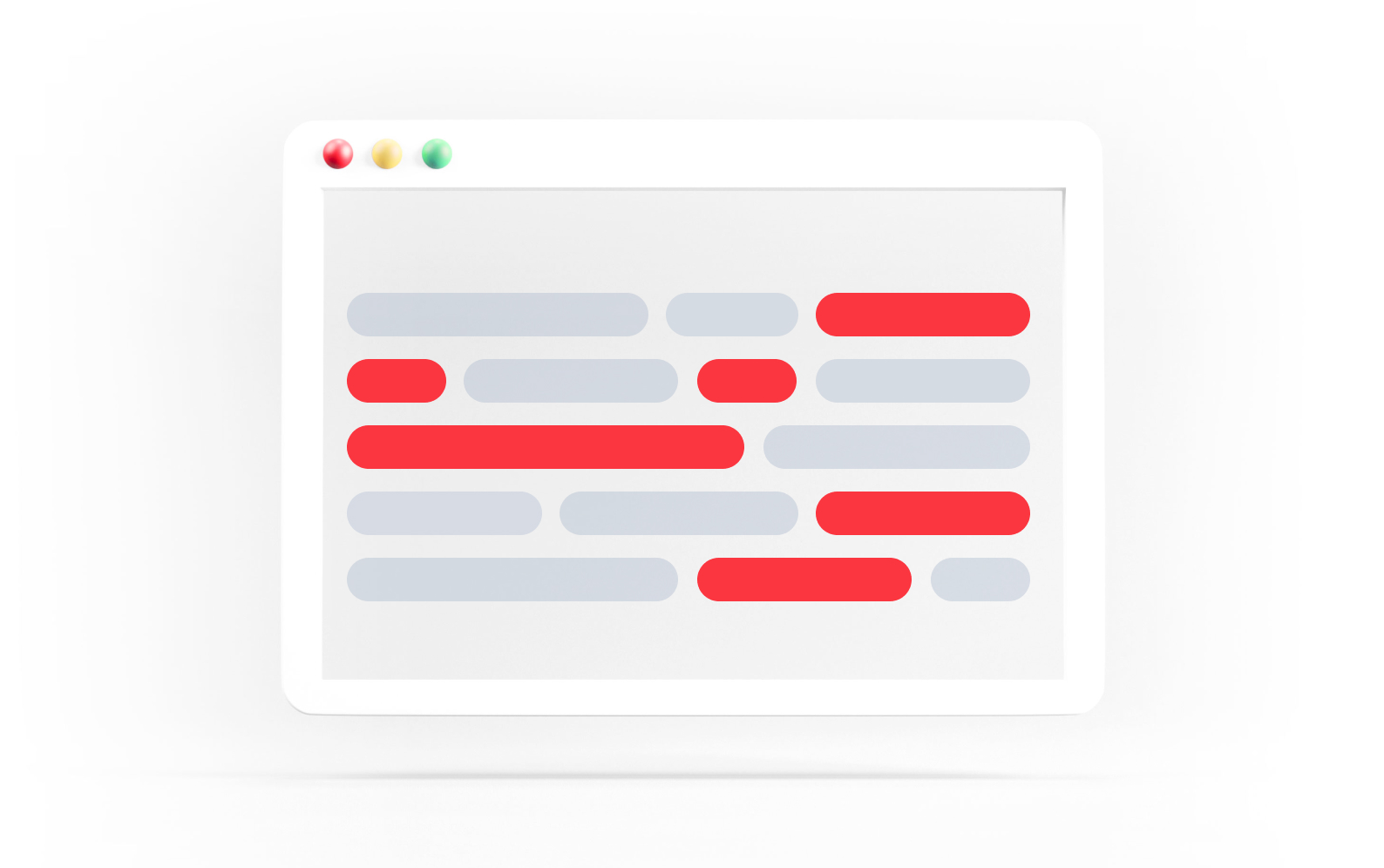 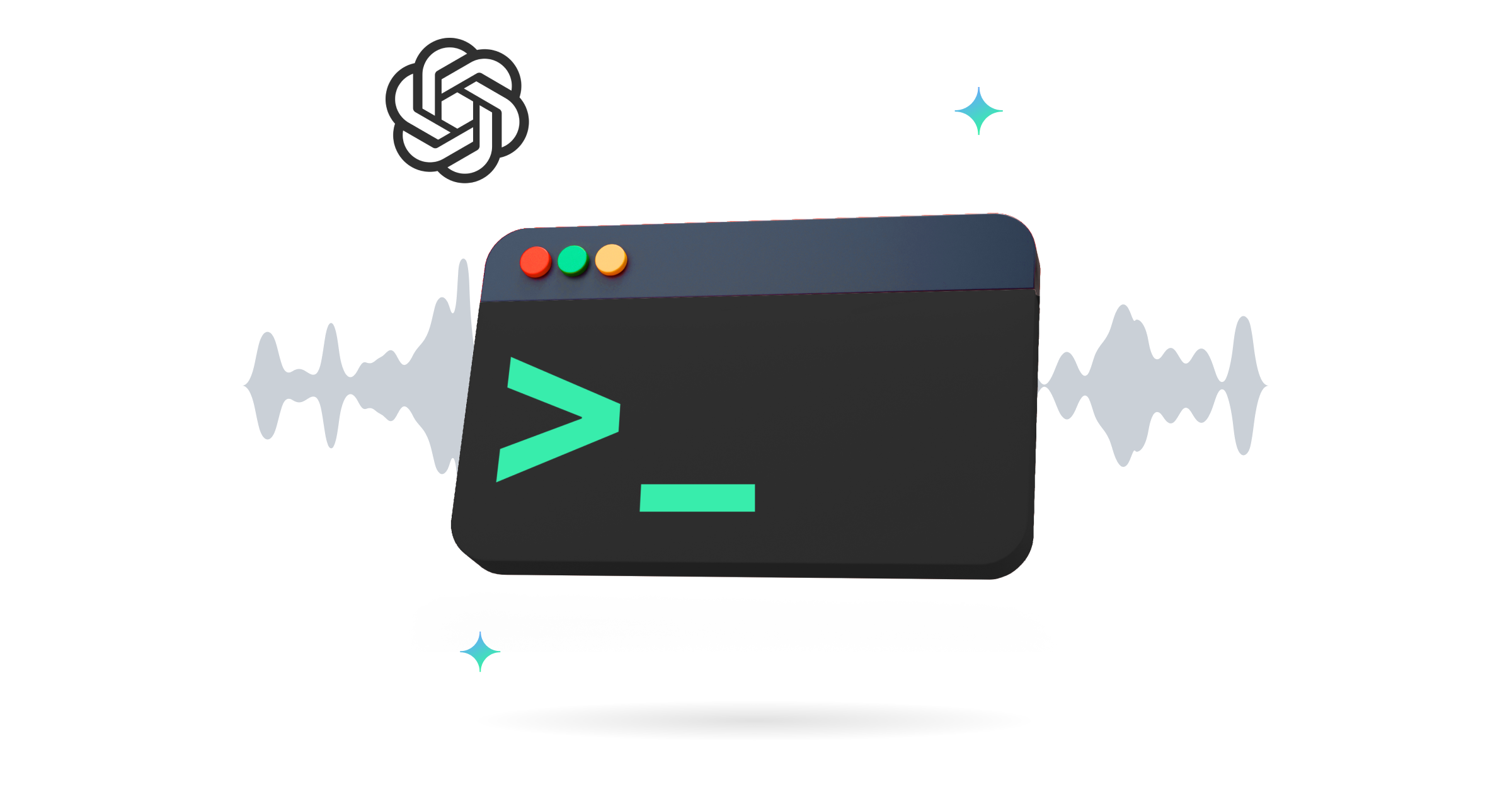 How to Run OpenAI Whisper in the Command Line 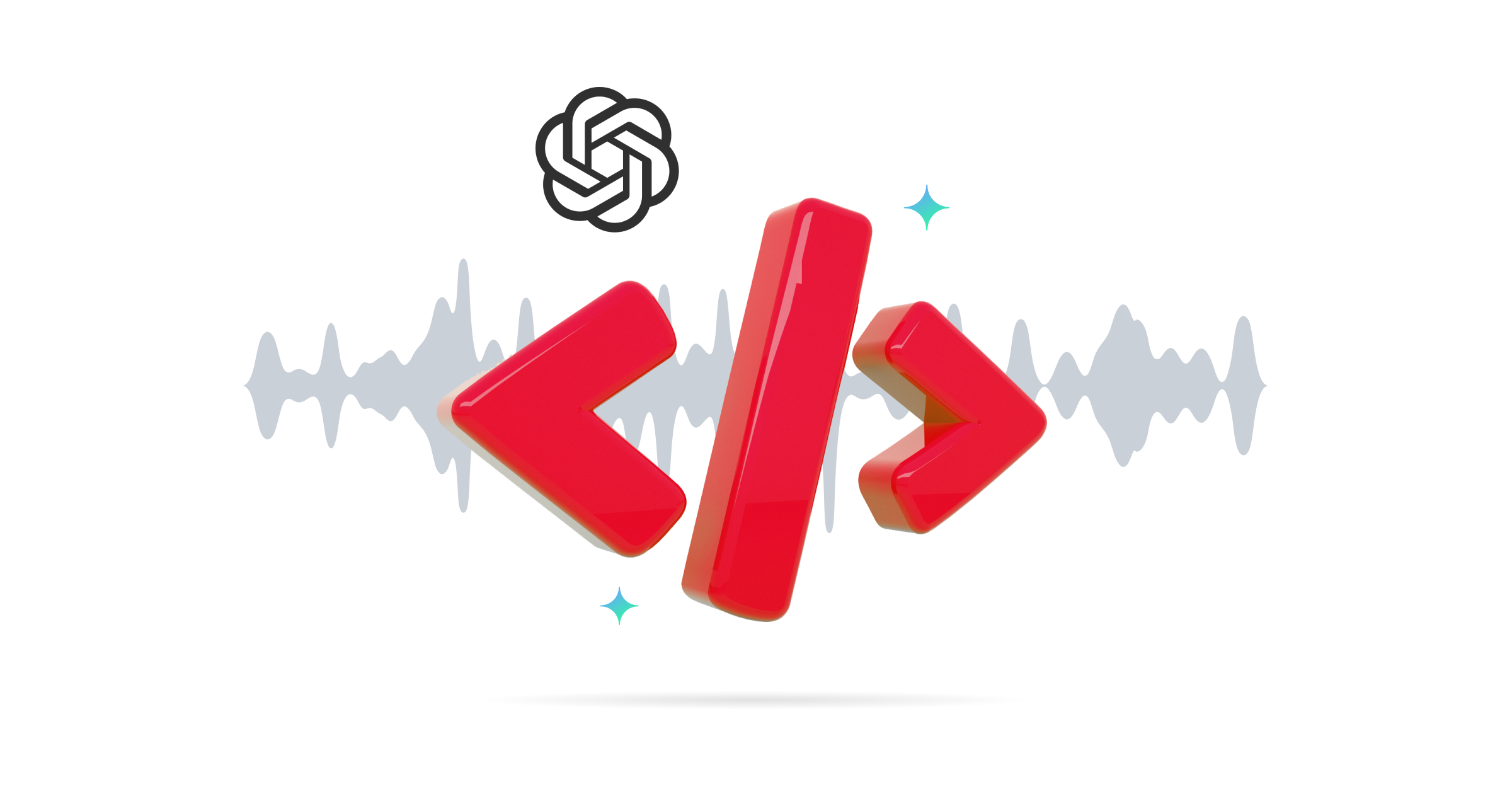 How to Build an OpenAI Whisper API 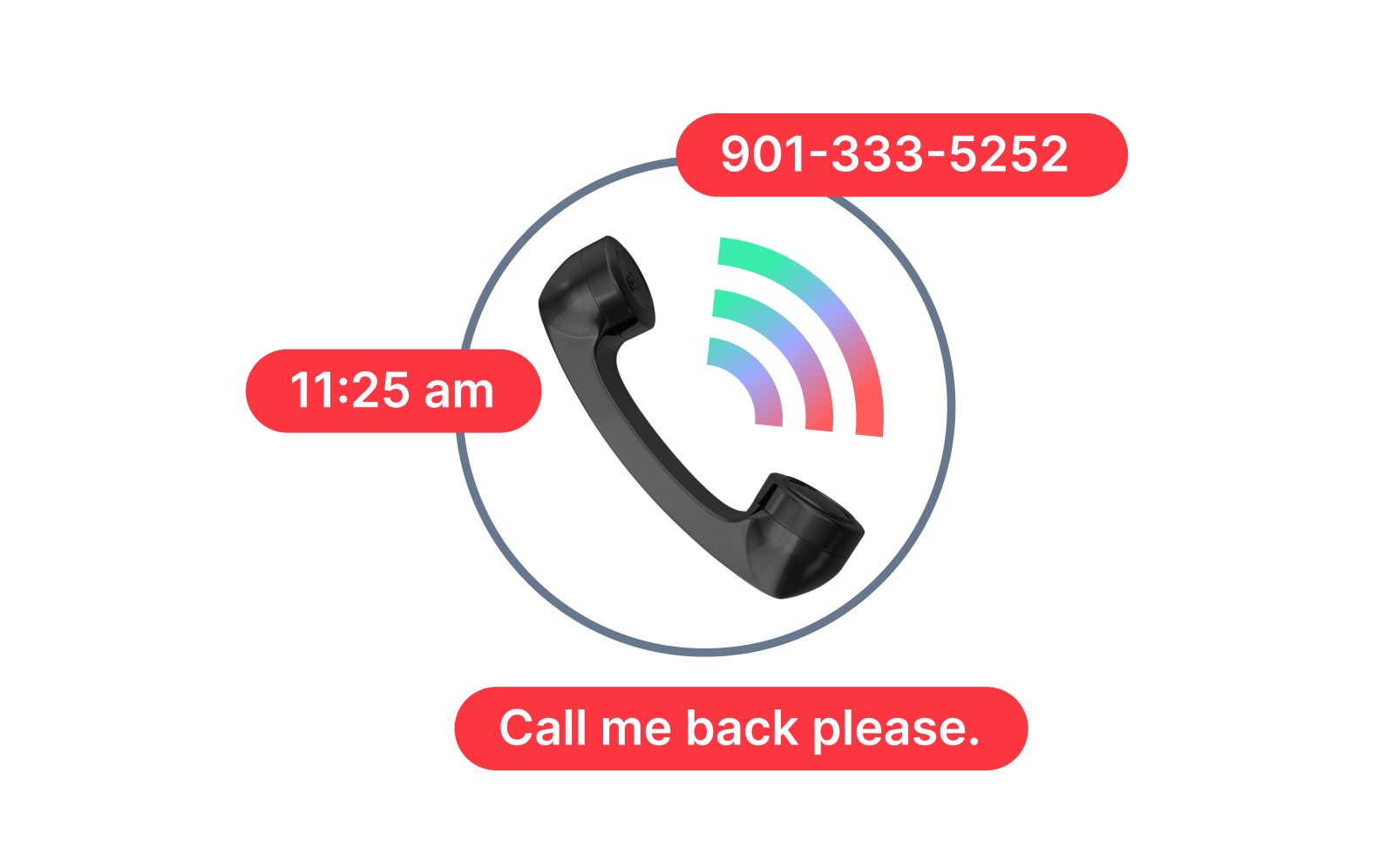 Identifying the Best Agent to Respond in Your IVR System