This post is a continuation of the series "How to Build a Live Streaming Web Application with Amazon IVS and Deepgram."

Composables are functions that encapsulate stateful logic, which means they are like little packages that are focused around performing one logical concern, and they keep track of state that changes due to the function running.

For example, I could write a composable function that toggles a menu open or closed. That logic could be used throughout an application, and it would need to keep track of the state of the menu being opened or closed. I would just need to import the composable into whatever file I need it and run the function.

Today I am going to introduce how to write a composable in Vue 3 to bring in the Amazon IVS video player SDK and to connect to my Amazon IVS streaming channel.

If you have wanted to learn more about how to write Vue 3 composables to use third-party technologies, this will be useful to you. In this post, I'll cover:

Background to the Series

In the first post in the series, I explained how to build a live streaming web application using just Vanilla JS and HTML. That post covers setting up an Amazon IVS account, which is necessary to get the third-party technology example (Amazon IVS) in today's post working. Setting up an Amazon IVS channel is necessary to build the second composable in this tutorial, but the first one can be built without doing that.

In the second post, I started building a full-stack application using Vue 3. I set up Vue-Router, Vuex, and a backend server which all helped me build a feature to restrict access to the streaming page of my site. Visitors to the site are required to enter a code, and that code is verified on the backend, resulting in the user being able to navigate to the streaming page. There is no need to read that post to be able to go through this tutorial on composables.

Today I'll build the video streaming page in Vue 3, focusing on building this feature with Vue composables. If you want a refresher on Vue composables, check out my post Reusability with Composables.

The code for today's tutorial can be found in this Github repo, the branch named "amazonIVS-composables."

Now I'll get into it!

The composables folder is where I will put the composition functions that contain the logic that makes the video player work. A common practice in Vue 3 is to name composables so that they begin with 'use'. The name will identify what the composable does. The two composables I will be writing today are useIVSPlayer and useIVSChannel. Here is what they will do:

My Github repo for this project shows how I have set up these folders.

In the VideoPlayer.vue file, I will start by writing the HTML I need in the Vue template so that I have a basic video player. I've given it a height and a width that I prefer, and the id="video-player" so that I can use that id later to bring in the Amazon IVS player. The attributes that the html <video> element supports are listed here.

The IVSStatus will be set to a ref property. For now, I'll make that property a string 'Is Not Connected,' but later, it will be hooked up to the status of the channel, and it will update to say 'Is Connected' when the channel is available.

Here is my setup function in the script block with that ref:

Here is how the page will look: 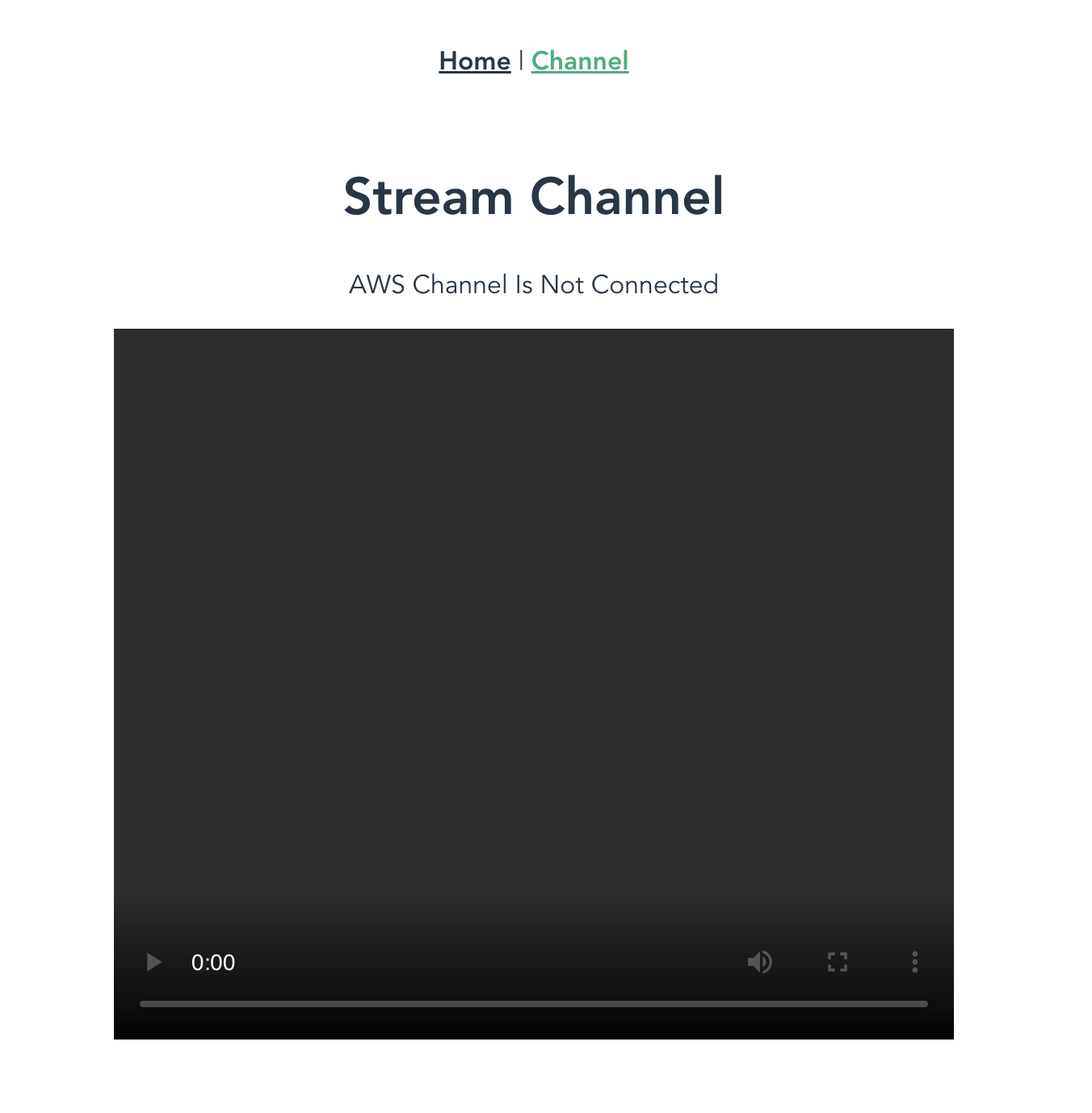 Now I am ready to write the first composable, the useIVSPlayer.js composition function, which will do the logic to bring in the Amazon IVS player.

Composable to Bring in An External Script

The useIVSPlayer.js composable will bring a script into my StreamChannel.vue component. The docs at Amazon IVS say that I need this script so that the player is brought in:

One way to bring in an external script is to add the script to the <head> in my index.html page:

Then I can type "IVSPlayer" in the console, and I should see the module there.

If I choose this way to bring in the script, the module will be available on every page of my application. However, sometimes it is preferable to make a third-party technology only available on the page where it is needed. In that case, I need to remove that script from the <head> and bring it in a different way.

If I only want to bring in the script on the StreamChannel.vue page, I need to write logic to build out the script tag with the src of the player URL. I will use a Vue composable, which is just a Javascript function, to build out this logic. Writing it as a composable makes it reusable, so I can easily copy it into other projects or bring it into other components in my application as needed.

Here is the composable:

I start with export default because I need to be able to import this logic into my VideoPlayer.vue component.

Now in VideoPlayer.vue I can import the composable. I am going to use a .then() method because useIVSPlayer is a promise. The .then() method will wait for the promise to resolve before doing whatever I write inside the .then().

For now, I will check that the player is available and console.log that it is ready. Later, I'll add logic inside the .then() to bring in my streaming channel.

Here is the setup function now in the VideoPlayer.vue component:

For now, I will keep IVSStatus as "Is Not Connected" because even though I have brought in the Amazon IVS player, I still need to hook up the video player to my channel stream. I'll do that in the next section.

Now I want to build a composable that will load my channel stream into the IVS player that I just brought in. This composable will do the following:

First, I'll write my composable with an export default so I can import it into other files as needed. I'll also bring in ref from vue so I can track the state of the channel being loaded. I'll create a ref variable called playerIsLoaded and set it to false to start:

Everything I need to do in this composable is dependent on the IVS player (the one I brought in with the useIVSPlayer composable) being loaded. So I'll wrap all my logic in an if statement to check that it is loaded and supported.

I'll use the player SDK's method create() to create a player for my channel. Then I'll attach the player to the HTML video element in my VideoPlayer.vue component with the SDK's attachHTMLVideoElement() method and I'll use .load() to load my channel's playback URL. I'll use play() to play the channel stream:

(The playback URL is unique to my channel, so it has to be taken from the Amazon IVS console. See my walkthrough in this post for more information.)

Now I need to check that the channel stream is loaded. This won't happen instantaneously, but it should load relatively quickly. I don't want to use a setTimeout because I don't know how long it will take and I'm concerned about the idea of adding a super long timeout if I don't have to. I'll use setInterval to check for the stream being loaded.

setInterval is a DOM API method that repeatedly calls a function until some other trigger happens to turn it off. In this case, the other trigger will be the channel being loaded.

Here's the logic I just described:

Here is the composable in its entirety:

The last thing I need to do to get this working is go back to the VideoPlayer.vue component and run the composable function inside setup and update IVSStatus based on the channel being connected, which I'll do in the next section.

In VideoPlayer.vue, I will run the useIVSChannel composable inside setup. Actually, I'll run it inside the .then() that I already wrote earlier, which will cause useIVSChannel to run after useIVSPlayer has resolved. (I have to remember to import useIVSChannel from the composables folder if I want to use it.)

I deconstruct playerIsLoaded off of useIVSChannel so that I can watch that reactive reference. I'll use Vue's watch method to make a side effect occur when the playerIsLoaded value changes to true (i.e., when the channel is connected). The side effect will be that the IVSStatus will update to "Is Connected":

Here is the entire script for the VideoPlayer.vue component:

However, nothing will happen in my video player in the browser if I have not turned on my stream. In the first post in this series, I showed how to set up OBS to use their software on my computer to create a stream, which I connected to an Amazon IVS channel.

If I turn on my stream in OBS, I should see myself in the video player in my application now! 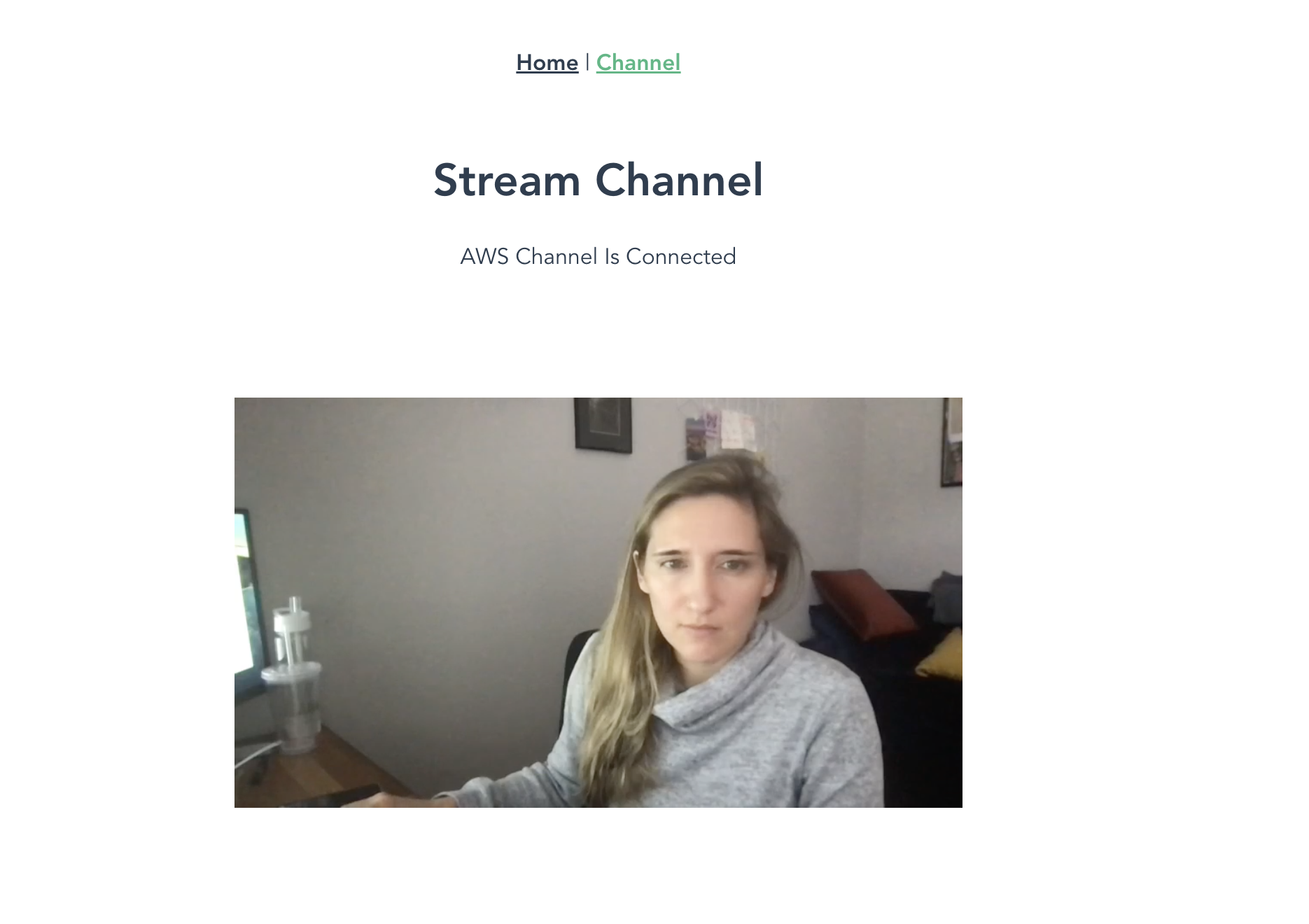 In the next post, I'll show how to write composables for using Deepgram's API to create text captions for my stream. I'll write a composable to use the browser MediaStreams API (a great example of a composable that can be reused in different contexts). I'll also show how to use fetch in a composable to get a token from the backend.