240 million emergency 911 calls are made in the United States per year. That averages out to roughly 600,000 calls per day. However, many of those calls are not emergencies. First responders often respond to barking dog complaints when people in need could use those resources.

It’s estimated that nearly 10,000 lives could be saved every year if emergency response times were reduced by one minute. Is there a way to visualize emergency calls by their type? Can we analyze the result and measure how to limit wasting resources on non-emergencies? Can we help increase the well-being of others when they’re having an emergency?

The answers are Yes, Yes, and Yes! We can combine speech-to-text using Deepgram and turn transcripts into data visualizations using a Python package like Matplotlib. Let's see why these two technologies are a perfect match.

​​Deepgram is an automated speech recognition voice-to-text company that allows you to build applications that transcribe speech-to-text. You’ll receive an actual transcript of the person speaking or a conversation between multiple people. One of the many reasons to choose Deepgram over other providers is that we build better voice applications with faster, more accurate transcription through AI Speech Recognition.

We offer real-time transcription and pre-recorded speech-to-text. The latter allows uploading of a file that contains audio voice data to be transcribed. We recently published a few blog posts on using our Python SDK to do live transcription with some of the most popular Python web frameworks, including FastAPI, Flask, Django, and Quart.

Now that you have a better understanding of Deepgram, let’s see how we can use the Deepgram speech-to-text Python SDK to turn transcripts into data visualizations with a package like Matplotlib. In the following project, let’s transcribe pre-recorded audio with Deepgram and use a bar graph to analyze the types of emergency calls and how many of those calls are received.

Before we start, it’s essential to generate a Deepgram API key to use in our project. We can go to the Deepgram Console. We'll make sure to copy it and keep it in a safe place, as we won’t be able to retrieve it again and will have to create a new one. In this tutorial, we’ll use Python 3.10, but Deepgram supports some earlier versions of Python.

Then we'll change into that directory to start adding things to it.

We'll install the dependencies for the project by running the below pip installs from the terminal inside the virtual environment.

Lastly, files with audio need to be added to the project so Deepgram can transcribe them. This project uses small audio-created samples using the PCM recorder lite for Apple or Android. This app will create .wavaudio files but please note that Deepgram supports over 100+ audio formats and encodings.

Now to the fun part! Let’s create a file called transcribe-with-deepgram.py, which holds all of the code in this project. 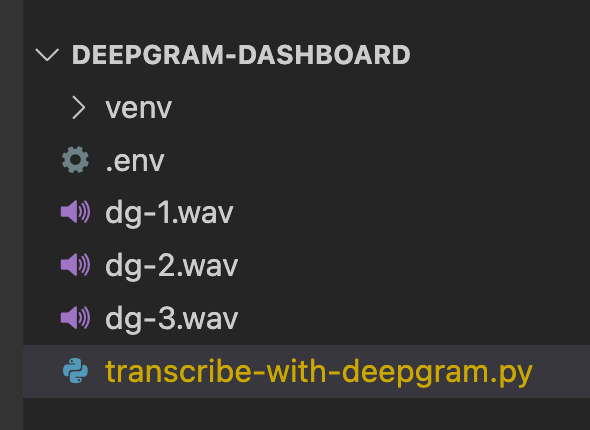 Let’s open the file transcribe-with-deepgram.py and add the following imports:

Let’s add this code underneath the imports:

The first line load_dotenv() loads the environment variables from the .env file and makes them available in the project.

The files variable holds all of the files in our directory that end in wav as we loop through each, indicated by the list comprehension [filename for filename in os.listdir() if filename.endswith('.wav')].

Get the Deepgram Speech-to-Text Transcript

Let’s add our first function to the transcribe-with-deepgram.py file.

words_count = Counter() creates a Counter object that holds key/value pairs of the words spoken in the transcript and how many times they appear.

In the below code snippet, we iterate through the .wav audio files in our directory and open each one. The source is set to a dictionary with the buffer value as audio and mimetype as audio/wav. If we were using .mp3 files the mimetype would be audio/mp3. The next line is where the actual Deepgram transcription happens with the pre-recorded audio await deepgram.transcription.prerecorded(source, {'punctuate': True}). Notice the source is passed in along with a dictionary {'punctuate': True}, which is a Deepgram feature that adds punctuation and capitalization to the transcript.

To get the words from the transcript, let’s check the JSON response object for results. Then we loop through the response and parse it to find each word in the transcript and append it to our list called words_list that was defined earlier.

In the last part of the function, we take our words_count Counter and create a list comprehension that appends all the words in the list words_list with counts. For example, it will have key/value pairs with each word from the transcript and how many times they appeared. The last line, return words_count returns it, so it’s accessible outside our function when we need it.

A lot is going on in this function, so let’s simplify it by looking at the code in bigger chunks.

Let’s get the returned value of words_count from the previous function by creating a new object words = await get_transcript().

The code below sets the labels on the x and y-axis, sets the title of the bar graph, and grabs the keys. The keys are the words in the transcript from the word object. Then it places each in the chart.

Lastly, we get the exact word count above each bar in the graph, loop through the graph, and create the height and width of the bars. plt.show() will display the bar graph.

Now, run the project by going to a command line prompt in the terminal and type:

A beautiful bar graph with Deepgram Python speech-to-text transcription and Matplotlib data visualization will get generated and look something like this (depending on the audio files used): 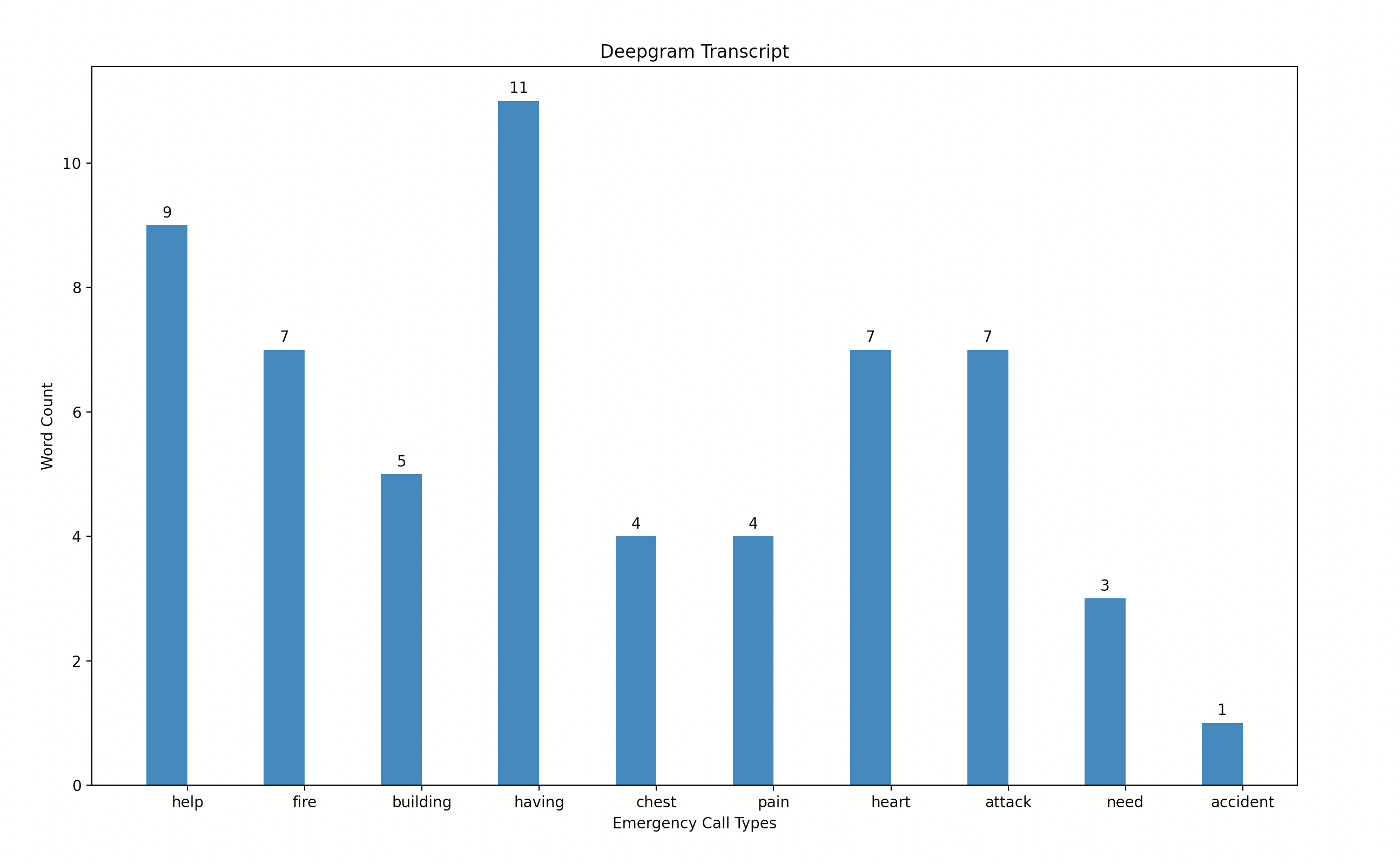 Conclusion of Deepgram Speech-to-Text with Python and Matplotlib

There are many other use cases for why one might want to use Python with Deepgram for voice-to-text transcription and data visualization. This project is just an example, and it’s encouraged to continue brainstorming innovative and game-changing ideas for speech-to-text and graphing. Can you think of other use cases for Deepgram and our Python SDK? To let us know, you can Tweet us at @deepgramdevs. We would love to hear from you!