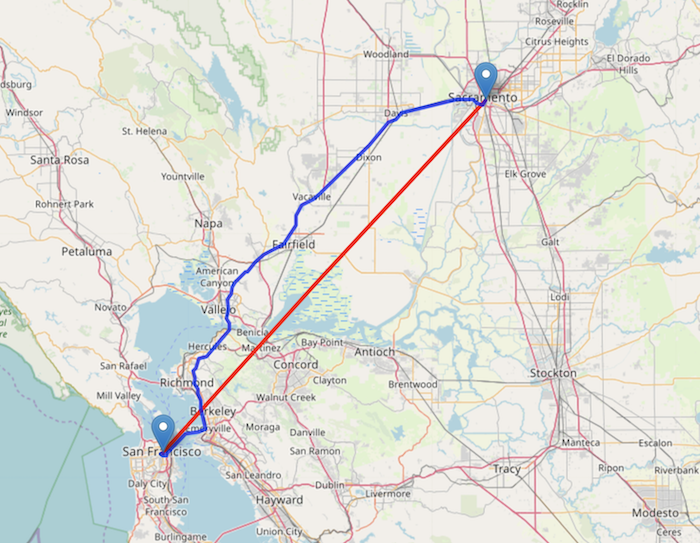 By road, the shortest road route is in fact 141.685 miles, and as the crow flies it is 120.495 miles. One assumes, that this is from the pinnacle of one capitol dome the other. Source here.

As the crow flies means "in a straight line" or moving about from point a to point b without deviation for obstructions. It is a fanciful saying that reminds us that obstacles often lie between us and our destinations and that birds are free to move without impediment. Like so many sayings, it's origins are obscure. Folk etymology attributes the saying to unlikely Viking tradition and to the book of Genesis. In truth, it seems that the Scots were among the earliest to use the phrase in English (or in a language geographically close to English speakers). A Scots English phrase "the crow road" predates the phrase "as the crow flies." The latter phrase appears in English in 1767. The modern American English phrase seems to have been made popular by Charles Dickens who used it in his book Oliver Twist. The term "crow road," incidentally, but not surprisingly, is the title of a book by Scottish author Iain Banks. It was turned into a TV mini-series. Neither the book nor the TV show seem to have anything to do with travel, crows, or birds for that matter.

English is not Alone

It is worth noting that this saying is one that exists in multiple languages.

Neither of the above phrases mention crows specifically, but both translate roughly as: "as the bird flies." Similar phrases probably exist in other languages as well. What is not clear-and here is a standard linguistics question-is if it is one language that came up with the phrase which has now been translated into others, or if different cultures came up with the idea separately? In many languages the same concept is expressed with a phrase meaning "in a straight line." This is the case in Spanish and German, for example. 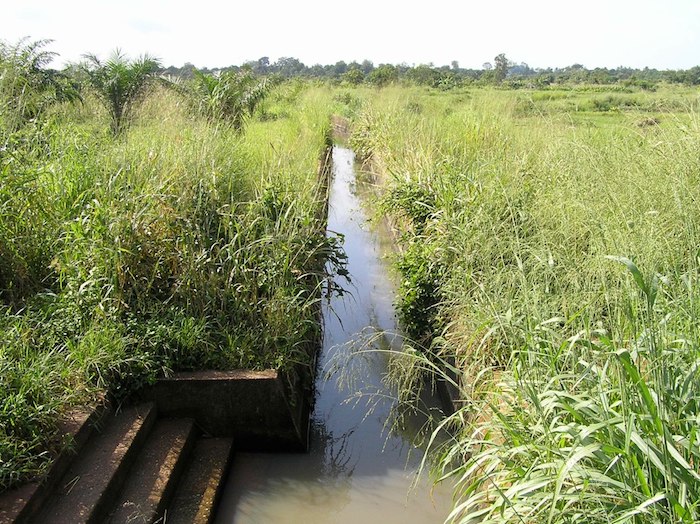 A canal somewhere in Togo. It is approximately 140 miles as the crow flies from the eastern border of Togo to the western border of Nigeria. photo credit

By comparison, in Nembe, a language from Nigeria, the same idea of "as the crow flies" is communicated with the phrase: Ongo dug which roughly translates as "take the canal". Perhaps the "crow road" the Scots spoke of in the 18th century is nothing more than a canal! In any case, English may be richer than most languages; when it comes to flight-related "move in a straight line" animal metaphors, we have two! To make a beeline for something roughly means to move directly toward some item, usually a desirable one. Why it is that these animals have been chosen as the biological embodiments of linear movement, it may never be known. We might have chosen ¨as shooting star falls.¨

Idioms are phrases in language that are used to convey emotions about certain topics. They are fascinating to everyday language speakers and linguists for a couple of reasons. They exist in a space between grammar and single words-this means that they somewhat conform to grammatical rules, yet have to be learned phrase by phrase just like most words need to be learned. Idioms also preserve in them the history of how and where they came to be. Certain idioms haven't left their villages in rural England. Others are universal. Variations in one idiom tell us about where they have been in time and place. They remind us of times long-gone and places near and far-when and where the world was different but people were the same.